“Pyramid is a tool one can use with groups of any kind to learn more about sustainability — locally, or globally. One can also use it to create sustainable development ideas and projects. The process is fun, fast-paced, and productive. Pyramid is a workshop tool that has been used around the world, with companies, government agencies, UN training programs, cities and towns, schools and universities.” –the Atkisson Group’s website 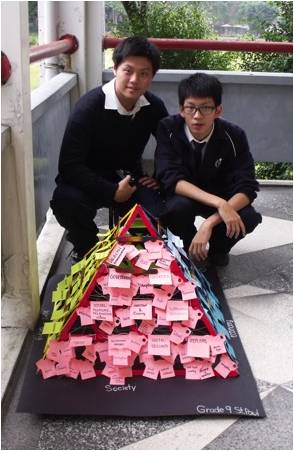 On 25 January 2013, the Dominican International School in Taipei, Taiwan, stopped all regular classes at eleven o’ clock and the rest of theschool day was devoted to a pyramid building activity. The Atkisson Group created Pyramid based on their long experience in bringing groups together, getting them to think collaboratively and systemically about sustainability, and then providing them a pathway for going from thinking to action. This activity was first introduced to students at the Global Issues Network (GIN) Conference in Manila in 2012 Each year the Dominican International School in Taipei has a Cultural Awareness Day run by the Social Studies Department. A number of the teachers involved in the GIN Club are part of this team. They argued   that sustainability issues are often very closely linked to culture and therefore cultural awareness could be integrated with the pyramid building activity. A further challenge was added – pyramids had to be built from recycled materials only. Old milk cartons; old green tea cartons; washed, disposable chop sticks from lunches; empty soda cans; empty cookie tins; empty plastic bottles of all descriptions; old cardboard boxes and recycled paper were some of the materials that were used.

The students who had built Pyramids at the Global Issues Network Conference in Manila in February 2012 were asked to become Pyramid Builder Leaders. They were assigned, in the weeks leading up to the event, to brainstorm the topic with classes allocated to them. They had to follow up with initiating the first discussion and to make sure that students did research on the topic they chose. On the day of the actual construction, they took charge. The teachers were there merely in a supervisory capacity. The next twenty years will be of critical importance to our planet, argues World Bank economist Jean-François Rischard. How global problems are resolved over these years will determine the fate of our planetfor the next generations. In his book, High Noon, Rischard points out the twenty most pressing issues facing the global community.

Because some of Rischard’s twenty issues are rather complex, four topics per school level were selected by the organizing team:

The organizers felt that these topics were relevant to Taiwan and to the age level of the students. In October and November 2012, the Junior GIN teachers did experiments with the grade one and two children during club meetings, in whichthey illustrated the effect of oil on sea water. They explained the devastating effect oil has on ocean life. They also took the Junior GIN students on a beach clean-up trip. These little ones chose Maritime safety and pollution as their topic and decorated their pyramid with pictures and other decorations, each meaning something, as their writing skills were not advanced enough to express what they wanted to say. The decorations symbolized issues, for example, the feathers symbolized the sea birds, the seaweed, maritime plant life. 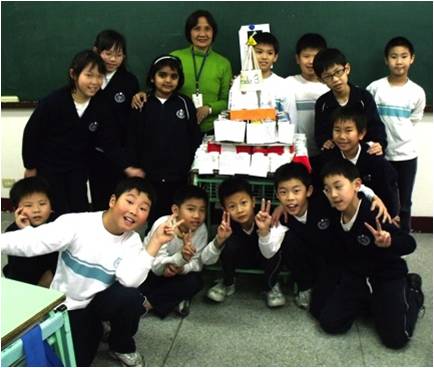 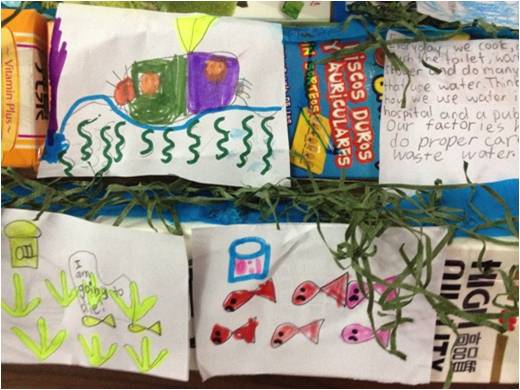 The Seniors chose Peace keeping, conflict prevention, combating terrorism as their topic. This  is a topic that has been top-of-mind at the school since the beginning of the term, when four of   the grade 12 girls and two grade nine boys went to an international peace conference in India, accompanied by one of the teachers. They had much to share with the others when they returned from India, but this activity also gave everyone who did not go to the conference an opportunity to brainstorm these issues. The pyramid building activity was a wonderful chance for the students to get into the depth of a topic while having a meaningful discussion about it, even at the very junior level. The physical building of the pyramid was a test for the students’ engineering skills. It was an ideal activity to occupy them mentally and physically, as they had to plan the next layer on two levels each time. Some classes had drawn up plans for building their pyramids before the event and painstakingly stuck to them. Others improvised as they went along. The results were sometimes humorous, sometimes surprising, but in the end, every class had a pyramid that represented their efforts, discussion and commitment. During the coming weeks, teachers will encourage their students to take their commitments further, as we remind them that the capstone for the pyramid symbolizes their pledge to create change that will make our planet a sustainable environment for the generation after them. 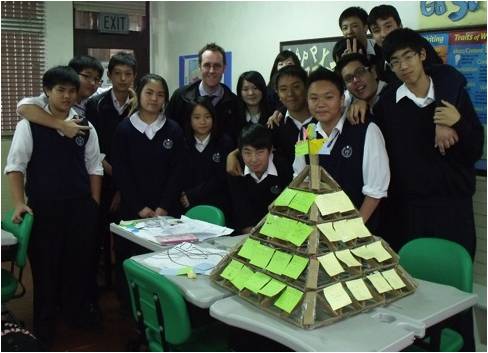 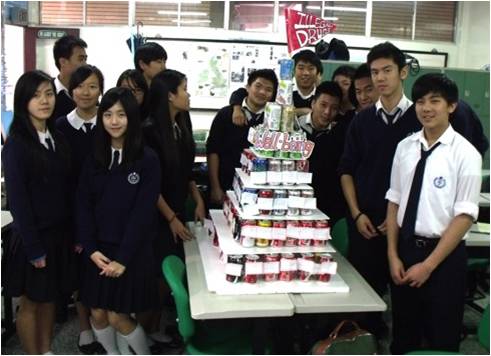 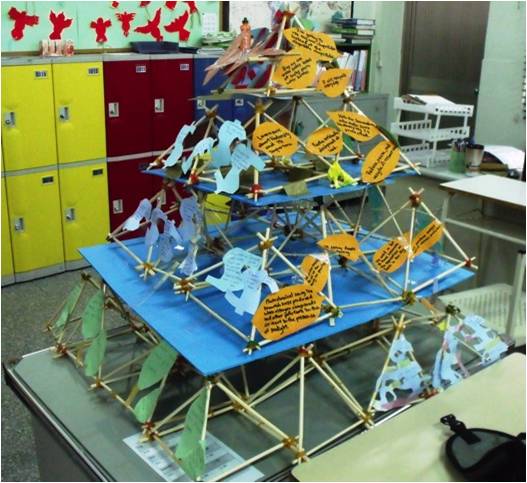