Conservation of the Bali Starlings in the Compass Model

The Compass model is an invaluable tool to help students become systems thinkers looking at the big picture of our world and its interconnections.

As an educator with a degree in ‘Educating for Sustainability’ and teaching at a school focused on environmental and sustainable education, I have found the Compass model to be one of the most useful tools at my disposal. I find it works well for both designing units and lessons to ensure each aspect of sustainability is touched upon, as well as a lens for students to look at topics and discuss and understand sustainability.

One of my favourite uses of the Compass model as an educator has been for a unit in which my Grade 8 class examined the conservation efforts to re-establish a healthy population of Bali Starlings into the wilds of Bali, Indonesia. Bali Starlings is Bali’s only remaining endemic species with the Bali Tiger was hunted to extinction in the early 20th century. It is a beautiful white-feathered bird with a striking patch of royal blue around its eyes and is held in high regard by the Balinese.

Unfortunately, its beauty was its down coming, as it became a popular bird on the exotic pet market. It was trapped and sold to the point that only about a dozen or so birds were thought to be living in the wild as late as the mid 1990s. However, through the work of a few organisations, there are a number of successful breeding colonies that have been re-introduced to the wild.

We were very fortunate to have as a guest in the classroom a person who traps and sells birds to the underground pet market. This gave the students a wonderful opportunity to humanise the poachers and understand the Compass model from their point of view – particularly their well-being and economics as it was revealed that this poaching was the best way he had to put food on the table for him, his wife and infant son.

Submitted in cooperation with Glenn Chickering, 2015, while serving as Middle School Coordinator and Global Awareness Teacher at Green School, Bali

Follow Me!
Better Teaching and Learning for a Better World Workshop at NIST International... 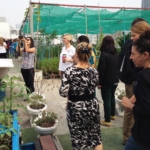