Sustainable Warrior: Investigating The Conflict in Jerusalem Through the Lense of the Compass

When we set out on the Jerusalem Week project at the Eastern Mediterranean International School (EMIS), we wanted to gain real life experience of the issues faced on a daily basis in the city of Jerusalem- one of the most contested, fought over, complex and desired cities in the world. The issues surrounding this city woven with culture, religion, politics, history, economic depravity, mistrust, and peppered with a dose of unhealthy international press, seemed too big to tackle from the outside in. With our student body comprising of Israelis, Palestinians and a representation of forty-two other nationalities, how were we going to tackle and explore these issues without emotional ties or a one-lens perspective?

Using the tool of the Compass helped to deepen my students’ understanding of the complex systems that exist within the walls of the Old City alone and how these, in turn, affect the entire ecosystem of Jerusalem.

Exploring the ecosystem of Jerusalem using the Compass model 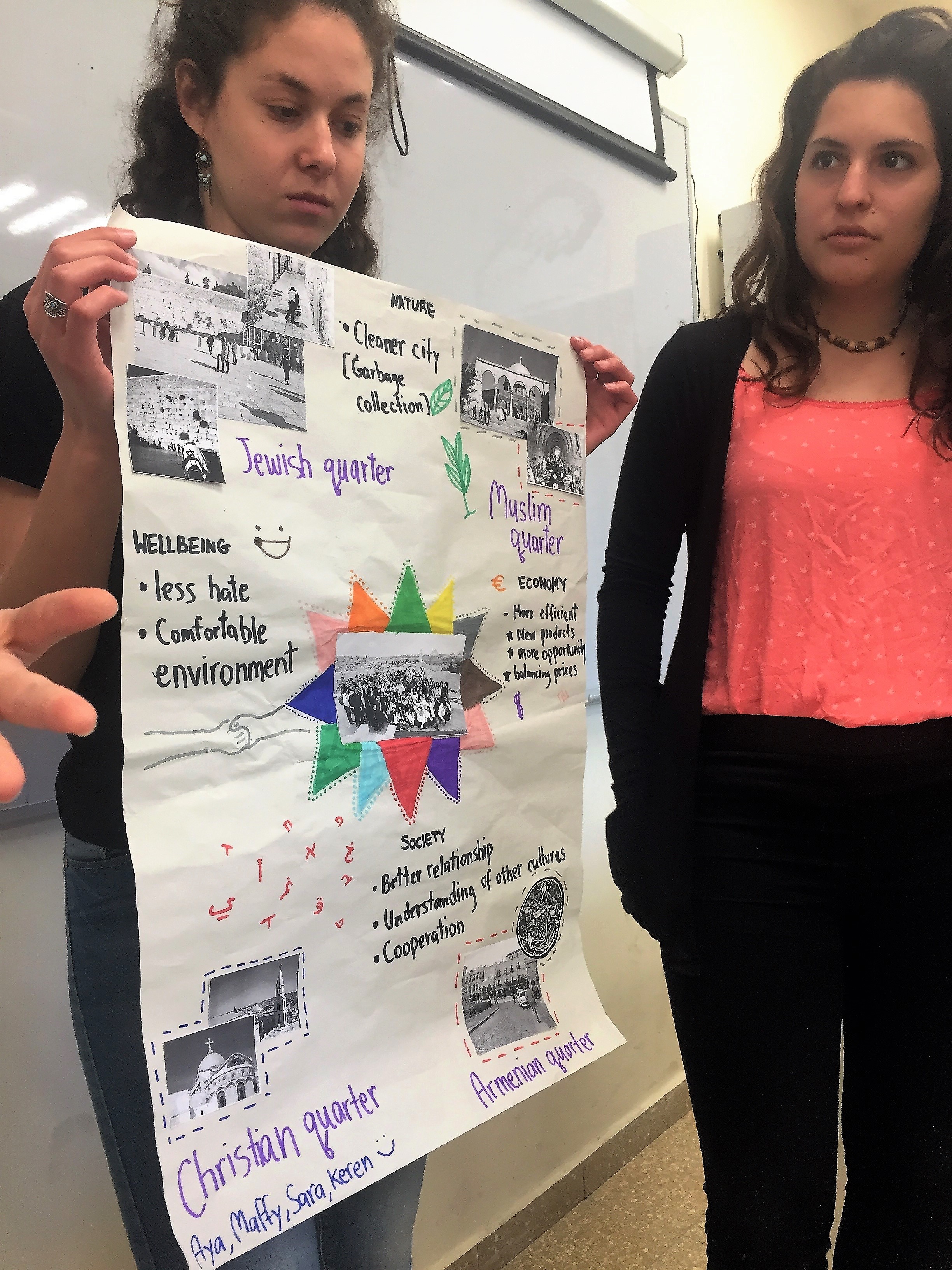 Each group was given a different topic to explore during their investigation day, which the students had to plan and create themselves. My group explored the concept of ‘Boarders and the Green Line’, which looked at the notion what the Green line really means, where is lies, what is beyond it, how can we tackle the concept of ‘settlements’ or the displacement of people from both sides. What is a boarder and what is a settler. We took a tour of the Green Line and visited a Settler’s house in Silwan, an Arab town in East Jerusalem. Other groups explored ‘Sovereignty’ or ‘Holy Sites’, ‘Municipality’ or ‘Education.’ Using the Compass as a pre-investigative tool, in hindsight, would have deepened the learning further but instead I used it as a reflective tool to demonstrate to the students that there is not a ready-made solution to such a complex issue.

Many of the conversations that arose from this project week concerned perspective and using the notion of Systems Thinking, we started to explore the Iceberg as a model for understanding that the final event reaches down to the deep depths of people’s long standing mental models and the difficulty in breaking a structure that has been held so firmly in place for so long. I combined this with some mindfulness exercises that asked the students to take themselves back to a conversation they had experienced during their week in Jerusalem and asking them to see it first from their perspective and why they responded the way they did and then, following some work on the importance of understanding shifts in perspective, we started to explore why we hold these perspectives. Suddenly, the conversations deepened, they started to understand that in order to have any hope of finding solutions to some of these ongoing issues, we would have to look at the factors involved from different perspectives.

Each group took one issue they found interesting during Jerusalem week and used the Compass to explore it. How did it affect the nature and environment of the city? What were the effects on the economy, society and wellbeing of the community involved and how did they negatively or positively re-enforce each other. Students created a poster on their issue using the Compass as their central point. They added positive and negative feedback loops and presented their ideas to the rest of the class.

When I reflect myself on the process of using the Compass to explore such a deep and complex issue, I realise that the process is as complicated as the system! In order for students to really attach meaning and understanding, a common language needs to be developed that focuses on the notion of Systems Thinking, allowing them to think more deeply about how to approach the investigation itself as well as using it as a reflective tool.

I hope this has given them a taster for further Compass development in the future!